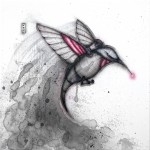 He dreams. We are walking along a dusky beach, he and her. There may be other people but they are of no concern to the couple that walk. She was angry at him earlier but she has looped her arm around him now and she beams up at him. They trip and roll on the sand or is it grass? Perhaps they’re in a garden. They’re late for something but can’t remember what. Neither care now, they’re so involved in each other that they’ve forgotten each other. Read more.