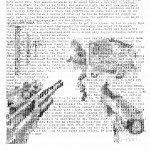 Go on without me

The gun feels light in his hand as Mike watches the first armed guard fall over the balcony.

He shoots the next two before they can get a shot off and stops the other from pressing the alarm over on his left. He’s under fire from somewhere above so he ducks behind a low wall to reload. He’s seen where the sniper is hiding and picks him off. As each new enemy pops up he takes them out. Minutes later he’s made his way to the penthouse suite of the heavily fortified castle where his girlfriend is being held captive by the evil prince. Read more.